Well hey, look, this time around I managed to wait a whole thirteen weeks before writing another Anime Roundup post! One big reason for that, of course, is that I've been distracted by the fourth installment of the Joel Suzuki series (you may have heard about it). But that doesn't mean I haven't been watching tons of anime in the meantime. So, hajimemashou!

(Remember, these aren't reviews, they're just my personal thoughts and opinions. Your experiences may vary.)

Aggretsuko: We Wish You a Metal Christmas 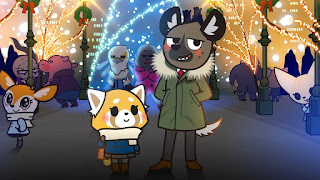 I was super stoked when I heard that this - a one-shot Christmas special - was coming out. And now that it's been out, I've watched it SIX SEVEN TIMES already, and each time I still laugh at the same parts. I'm telling you, it's sheer genius. Although, at about 22 minutes, it was a little short in my opinion. Of course, that's because I could probably watch hours and hours of this show on end and not get bored. I described it to one of my friends as "like if South Park and Hello Kitty had a daughter." I cannot wait for Season Two. My favorite moment from the Christmas special (among the many) is the exchange between Haida and Fenneko when they say "isn't that the mackerel in miso sauce you get from the convenience store for 258 yen? I love that stuff! Yeah, it's good stuff." Trust me, it's hilarious in context. Also funny: "we're gonna get a complaint from Instagram." 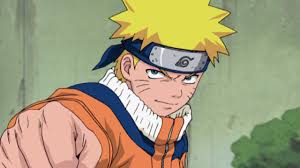 I'll admit, this show was a slow burn. Unlike other S-rankers like Aggretsuko and Soul Eater, I didn't fall in love with it right away, especially because of its penchant for spending nearly half of each episode recapping what happened in the previous episode (I understand the need for this when it was a weekly serial, but it makes binging it kind of tedious). To be fair, this practice tapered off as the seasons went along. Also, it got more and more exciting as new characters were introduced and the world-building really started to ramp up. I originally had access to six seasons on Netflix, but then when I was about near the end of Season Two, they were all removed! After that, I spent a few weeks with a Naruto-sized hole in my life that really gave credence to the whole "absence makes the heart grow fonder" thing. Fortunately, Netflix saw fit to replace it later, albeit with just five seasons instead of six. I resumed my binging from there and also made sure to add the myriad of Naruto movies (of which I've now seen three) to my list. Surprisingly, that wasn't the moment that I decided to promote this show to "S" rank - that moment was when I caught myself reading Naruto trivia on the Internet because I couldn't wait to find out whether Naruto ever becomes the Hokage or not. Final thought: I know he's just an anime character, but I find his delusional self-confidence to be very inspiring. 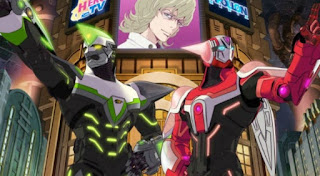 A superhero show whose main character is a single dad trying to hold on to the glory of his early days while surrounded by younger teammates who basically treat him with contempt? Yes please. Lots of laugh-out-loud moments, including every time Kotetsu (the aforementioned main character) calls his new partner "Bunny." 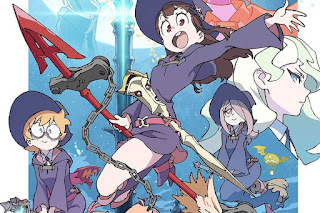 If you've ever asked yourself "what if Hogwarts was an all-girls school where everyone spoke Japanese?" then this show is your answer. It's totemo kawaii (very cute) but it has a slight winking edge to it that keeps it from being too sugary. I love Akko's various expressions and the fact that she can't ride a broom. In fact, being sort of a Muggle, she's not very good at magic altogether, but, like Naruto, she has an inspiring amount of delusional self-confidence. 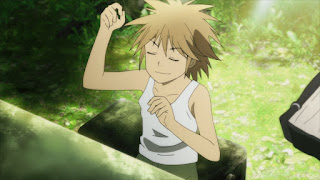 After Your lie in April was done, I guess I needed another piano-related show to watch, so Netflix suggested this one. And it was good! Thanks to this show, I memorized one of my first non-number kanji characters, for the word "forest" (it basically looks like three trees). Season two is supposedly coming out later this month, so yay. 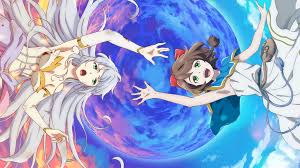 Okay, these comments are going to be a bit spoiler-y, so if you don't want to know, skip down to the next section.

All right, so this show starts off innocently enough. Like, you're pretty sure you know what you're getting, which is sort of a standard coming-of-age tale in a semi-medieval/fantasy setting that involves music as magic (hey, that idea sounds familiar). But then, about halfway through, it totally flips stuff around and messes with your mind to the extent that I was yelling "whoa, no way!" over and over again at my TV. Everything that you thought you knew about the show changes, and it's amazing. I was a bit disappointed when it was over after only 12 episodes, but it ended in a way that felt right - like, it was really the only way the story could end, and it happened at the proper moment. I don't think there's going to be another season, but I've heard that there might be a related project in the works.

Hey, guess what - there are no Category B shows this time around! The reason? My guess is that it's either: (1) Everything I tried watching held my interest from the get-go; (2) I was a little more patient and stuck around longer than in the past; or (3) The more anime I watch, the more I can kind of see where a particular show is trying to go with its direction, if that makes any sense. I think it's probably a combination of the three. With that in mind, I'm sure I'll be giving the previous category B shows (listed below) another chance one of these days - that is, if I haven't already found tons of other stuff to try (a distinct possibility).

Coming up next week: yet another roundup post!
Posted by Brian Tashima at 6:48 AM