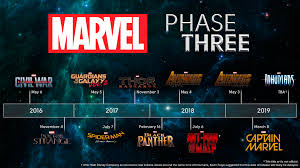 Okay, Disney/Marvel, bring on Phase 4!
Posted by Brian Tashima at 6:25 AM