Here's what I've been up to! 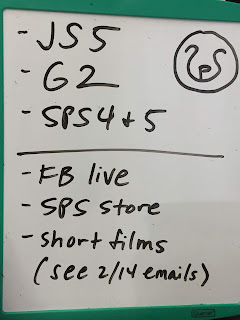 Joel Suzuki, Volume Five
I submitted the official first draft of the manuscript to my editor on December 30 and received it back with her notes on January 14. As always, she had tons of good feedback and suggestions, so right now I'm deep into rewriting mode. There's a lot of work to be done, but hopefully I'm still on track for a 2020 release. Or 2021. Whatever. We shall see. As we learned in Joel Suzuki, Volume Four: Fable of the Fatewave, things will work out the way they were meant to.

Glorified, Issue #2 ("Ragged Town")
All the pages have been thumbnailed, most of them have been sketched out, and a majority of them are already inked and complete. Very excited!

Second Player Score Albums Four ("Four-D") and Five ("200BPM")
Album Four has three songs with completed music, lyrics, and arrangement, and there are thirteen more in various stages of development.

Album Five has one song with completed music, lyrics, and arrangement - in fact, it's already been recorded! - and twelve others in various stages of development.

Facebook Live
The band and I are making plans to start livestreaming portions of our Sunday afternoon practices on Facebook. We did it once before, and it seemed to get a good response, so we figured we'd try doing it on a more consistent basis.

Second Player "Store"
We're also in the process of ramping up our merchandising efforts with more cool stuff and easier ways for people to get their hands on them.

Short Films
And finally, we're considering putting into production the short films that I discussed in this previous post, although possibly in a slightly different format, like breaking them up into even shorter segments and turning them into a webseries. We shall see.

Anyway, stay tuned for more updates!
Posted by Brian Tashima at 6:16 AM