Welcome to yet another edition of Anime Roundup, where I offer brief comments and random thoughts on various anime shows and films that I have watched. What? You're saying that you already know what Anime Roundup is? Well, then, ikimashou! 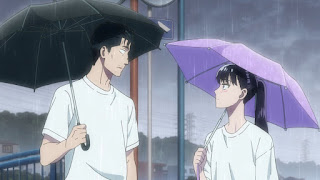 This is a wistful slice-of-life comedy/drama that, on the surface, is about a teenager who develops a schoolgirl crush on the middle-aged manager at her part-time job. Trust me, this is not as creepy as it sounds, because actually, the show is more about themes like loneliness, friendship, broken dreams, and, ultimately, discovering - or rediscovering - one's purpose in life. 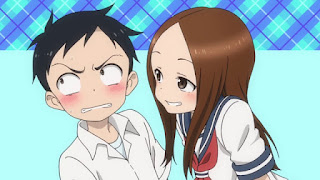 Netflix kept recommending this one to me, but I kept resisting, because it starts with Season Two. I mean, who wants to begin watching a show with Season Two? I finally gave in, and it turned out that it didn't really seem to make a difference, because this cute rom-com mostly consists of little vignettes featuring a girl who teases the boy she likes and his futile attempts to get back at her (she's Master Takagi-San, by the way, not him). There's continuity as far as the passage of time is concerned, but there's really no plot per se, so it was easy to pick up what was going on. I imagine that Season One was basically more of the same (apparently it was shown on Crunchyroll and Funimation but not on Netflix because the latter only picked up the show with the second season). 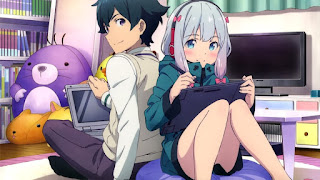 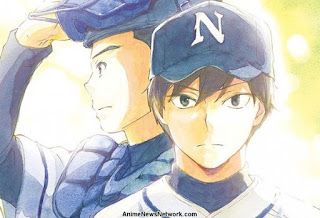 Do you miss baseball? I miss baseball, which is why I decided to give this one a shot. What I ended up finding was a quiet, contemplative, slow-paced show that is not really about baseball, but more about the complexity of interpersonal relationships. So, yeah, a typical sports drama, this is not. Plus, the protagonist was unlikable and everyone seemed much too tall and sulky to be middle schoolers. Still, though, the time went by pretty quickly as I was watching it, so I must have been having fun (either that, or I'm more starved for anything baseball-related than I thought). 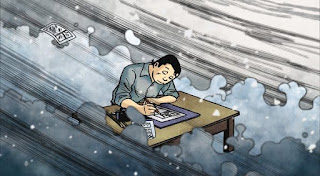 And now for something completely different. This feature-length animated film, which follows the real-life career of legendary manga artist Yoshihiro Tatsumi (intercut with segments based on his short stories), is not what you would expect from contemporary anime...in fact, it wasn't what I was expecting even after reading the description and watching the trailer. It is, however, a perfect representation of Tatsumi's gekiga subgenre, which typically deals with darker, more mature themes. It's a bleak and harrowing journey (I had to take several breaks) that may not be good to watch during challenging times...or maybe it is, because of the perspective that it provides. I'm not sure. Either way, if you decide to brave it, just know that the adjectives most commonly associated with this film are "sad" and "beautiful," which pretty much sums it up quite nicely. Trust me, you'll be thinking about it long after you finish watching.
Posted by Brian Tashima at 6:22 AM