This recent batch of anime that I've watched all seem to have one thing in common: cool plot twists. Then again, I guess a lot of good shows have them, so maybe I'm just reading too much into it. Anyway, hajimemashou!
Erased 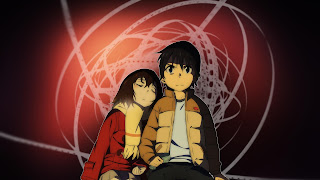 What would you get if you took Big or 13 Going on 30, flipped the original age differences of the protagonist, mixed that with Groundhog Day, and then changed the result from a drama/comedy into a twelve-part murder mystery/thriller? You'd end up with this show, which is pretty darn awesome. Although, the original Japanese name for it translates to "The Town Where Only I Am Missing," so I'm not sure how they got from that to "Erased"...oh well. Anyway, the basic gist of it is that a 29-year-old struggling manga artist (who also works as a pizza delivery boy to help make ends meet) has an ability he calls "revival" - no explanation for this is given, and none is needed - which involuntarily sends him back in time usually just a few minutes to a point right before a fatal incident occurs, allowing him to prevent it from happening. For the most part he treats this power pretty nonchalantly, occasionally saving lives like it's no big deal before resuming a mundane daily schedule. But then his mother is murdered by someone who frames him as the suspect and his ability sends him back not a few minutes, but eighteen years - and then the real story begins. With its compelling plot, interesting twists, and satisfying story beats, this one definitely makes my list of favorites. There's also a live-action adaptation which remixes the anime a little bit and plugs a few plot holes but basically follows the same storyline and is also a fun viewing experience.
Toradora! 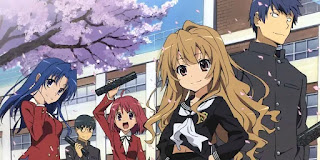 A rom-com/dram about a boy and a girl who have crushes on each other's best friends so they scheme to set each other up while in the meantime it's pretty obvious they're actually a perfect couple, this one takes a few twists and turns - including the introduction of a fifth-wheel interloper - before eventually arriving at the place you knew it was going to all along. Or does it? Yes, it does. OR DOES IT??
The Promised Neverland 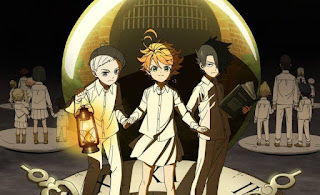 You already know something creepy is up when the show starts off with a bunch of happy orphans living in the same house, wearing the same white uniforms, with numbers tattooed on their necks. Oh, and a caretaker who seems nice but is obviously hiding something. This is not really a spoiler because the plot is revealed pretty early on: the kids are actually being raised as food for demons. So, of course, one day they discover the disturbing truth by accident and then spend the rest of the season trying to figure out how to escape. By the time you get to around episode six or so, you think to yourself "even if they get out, there is a LOT more to this story than this, kind of like in The Maze Runner" and sure enough, a second season is coming out next year (yay!) and you find out that the original manga upon which the show is based actually ran for four years over twenty volumes (181 chapters, of which the show's first season adapted 37).
Great Pretender 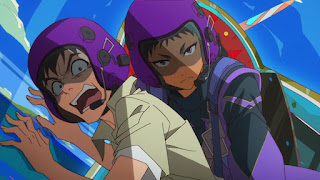 A crime comedy about a con artist who tries to con someone who is actually an even better con artist than he is so he ends up having to work for him, this show is fun and fast-paced with an original art style and some surprisingly deep character work. I like to watch all my anime in Japanese with English subtitles, but I get the feeling that this one might actually be better with the English dub since I think the characters are supposed to be speaking in English most of the time. My only question is: Netflix, since you own this show, why didn't you release all four cases (blocks of episodes that focus on one particular plot thread) worldwide at the same time?
A Lull in the Sea 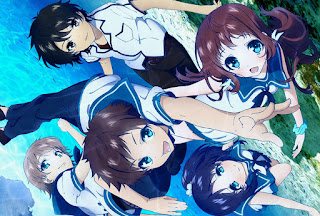 A gentle drama with an interesting premise: two civilizations living side-by-side, one on land, one in the sea. The sea people are just like regular people but with something called "ena" that allows them to breathe underwater (no gills here) and dries them off instantly whenever they come to the surface. They also watch TV underwater, which I don't know how that works exactly, but whatever. Anyway, against that backdrop (and an "A" plot of a looming environmental disaster that threatens the surface), there's a coming-of-age story (the "B" plot) that starts off as a love triangle but then evolves into more of a love dodecahedron that you will need a scorecard to keep track of. The overall tone is pretty mellow, but it never gets slow or boring, and for the most part the show has the art of the episode-ending cliffhanger down pat.
Posted by Brian Tashima at 6:25 AM