For quite a while, I had been hearing a lot about a service called "Crunchyroll" where supposedly you could see bajillions of different anime, but for the longest time I had been under the impression that it was some kind of sketchy website with illegal uploads, so, as an artist and creator who has sworn not to engage in piracy out of respect to other artists and creators, I avoided it.
But then I started to hear that a lot of the stuff I wanted to watch - that wasn't on Netflix or Amazon Prime - was, in fact, among the bajillions of anime available on Crunchyroll (some of them are on Hulu as well, but like I've said before, heck if I'm signing up for yet another paid streaming service). So, feeling desperate, I looked a little deeper into Crunchyroll, and lo and behold - yes, it used to be sort of sketchy, but has been legit since 2009. And on top of that, it's available as a free (with ads) app!
So now, here I am, having unlocked what feels like an enormous and nearly-bottomless treasure chest filled with toys and treasure that will keep me busy for centuries. Some are shows that I've heard lots about but haven't seen yet, while others are additional seasons of shows that I've seen on Netflix or Amazon, but for only the first season or two (why those services don't carry these additional seasons is beyond me - probably some kind of legal licensing mumbo-jumbo). Anyway, here are the first few:
My Hero Academia

I had heard so much about this show peripherally that I almost felt like I had seen it all before I'd actually seen any of it. Once I started actually watching it, I almost immediately knew why it's so popular and prevalent. The basic gist of it is: (in movie trailer guy's voice): in a world where about 80% of the world's population has some sort of superpower, a boy born without powers but who still wants to become a superhero is discovered by the world's most powerful hero, who then shares his ability with him and gets him enrolled in a prestigious high school that trains students to become professional heroes. Got all that? Essentially, it's like if Harry Potter was a muggle but then Dumbledore somehow gave him magic and then got him into Hogwarts. Anyway, this show checks all the boxes on the "will Brian like this?" list and I seriously could not stop watching it.
Goblin Slayer 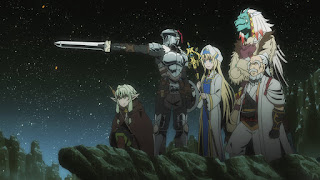 This one is like a R-rated Mandalorian in a Dungeons and Dragons world. The story basically goes like this: the Demon Lord, who was slain by the Sword Maiden years ago, has been resurrected and, along with his vast new army, threatens to take over the world - that is, until a Hero arises to defeat him. But wait! That's not actually our story here. While that stuff does happen in the background, what we're watching is just a dude whose sole mission in life is to kill goblins. This is actually way more compelling than it sounds, because the show makes the goblins so foul and despicable that a John Wick-meets-The Crow kind of vengeance tale will definitely have you rooting for the stoic protagonist. Also, buried underneath all the tragedy and gore is the message that sometimes, it's okay to ask for help.
Food Wars! The Third, Fourth, and Fifth Plates 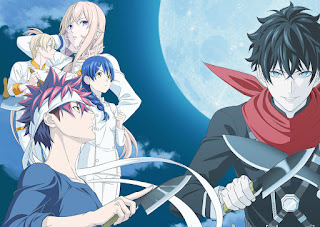 I wrote about the first season of this show in this roundup post, and then I wrote about the second season in this roundup post. If you've read those posts, then you know that I really, really like this show. Really. In fact, after watching seasons three through five (the final season) on Crunchyroll, I think it just might have moved up from #3 on my all-time favorites list to...#1?? Gasp! I don't know, I just finished it, so I'll have to let it sink in for a while. It was funny because season four ended in a place where I thought, "that was pretty epic and wraps things up nicely, so where could they go from here? Could they possibly raise the stakes even higher?" As it turned out, yes, yes they could (I read that even the writer himself considered ending the manga series after the arc that was adapted into season four, but he realized that there was more story to tell).
Cells at Work! Code Black 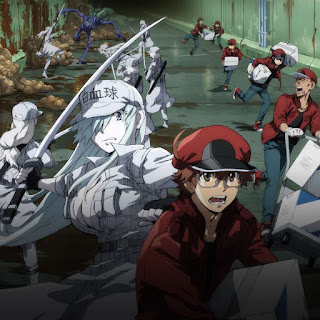 A darker, gender-swapped spinoff of the original Cells at Work! (covered in this roundup post), this one features the anthropomorphic cells of an alcoholic dude who smokes and engages in other unhealthy activities. There are certain moments that could spill over into gross-out parody territory a la South Park et al, but the show does a good job at keeping its tone from ever reaching that point. It even gets downright dramatic and emotional at times. All I can say after watching this is: the human body is pretty darn amazing, but I sure wouldn't want to be the guy these poor cells have to live and work in.
Himouto! Umaru-Chan 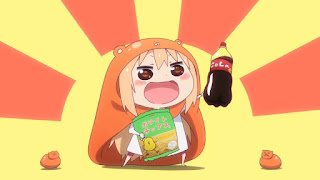 Dan the bass player from Second Player Score recommended this one a while back, but I couldn't watch it because it wasn't on Netflix or Amazon Prime. But after I got Crunchyroll, I thought "it must be there, right?" And sure enough, it was! It's a fun and adorable slice-of-life comedy about a teenage girl who's a complete overachiever at school and in public (popular, attractive, smart, athletic, talented) but once she gets home she immediately morphs into a cola-swilling, junk-food-gorging, video game-playing, anime-binging, manga-reading lazy otaku (nerd) slob, much to the dismay of her older adult brother, who is in charge of the household in lieu of their absentee parents (which, if anime is to be believed, seems to be a common thing in Japan).
Posted by Brian Tashima at 6:13 AM