It's time for another edition of Anime Roundup!
My Neighbor Totoro 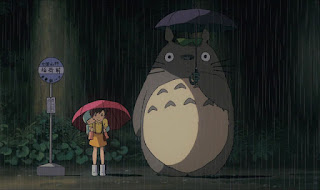 Continuing with my Studio Ghibli catch-up mission that started with Spirited Away and Princess Mononoke, I decided to check this one out, which ended up being a total delight. A story about two sisters (and their father) who move to a rural area to be closer to their hospitalized mother and subsequently encounter spirits in their new house and in the woods, it's a simple yet nuanced tale that is layered with deep thematic elements, which seems to be the Studio Ghibli modus operandi. Also, now I really want to ride a Catbus (I've heard there's a giant plush version in the Ghibli Museum in Japan, but only kids 12 and under can enter it. Ageism!) 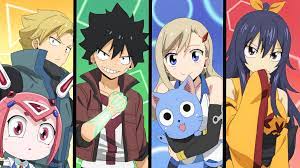 Brought to you by Hiro Mashima, the same mangaka (manga creator) responsible for Fairy Tail (a personal favorite of mine), this one is a Star Wars-influenced "space fantasy" about a teenage boy who goes on a quest through the universe to find the fabled goddess of the cosmos while making as many friends as he can along the way. Okay, so, Mashima-sensei, I have questions: is Happy the cat the same being in both Fairy Tail and Edens Zero, or is he just a parallel-universe-doppelganger version? Along those lines, are Rebecca Bluegarden and Elsie Crimson the doppelgangers of Lucy Heartfilia and Erza Scarlet? And was that Natsu I saw in the diner in one of the early episodes?
Words Bubble Up Like Soda Pop 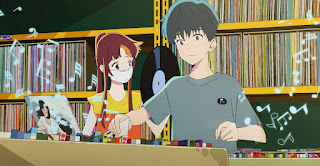 A cute slice-of-life rom-com/dram film (not a series) about two shy teenage kids - a boy who loves to write haiku and an online influencer girl who wears a mask to cover her braces (no, not because of Covid) - who have a chance meeting at the local mall and then there are lost phones and a day care center and a old vinyl record mystery and, well, you just have to watch it.
Isekai Izakaya: Japanese Food from Another World 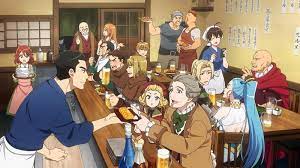 The best way I can sum this show up is that it's like Food Wars but without the "fan service" or, well, any semblance of a plot. But that's okay, because I love it anyway! I mean, it's basically a portal fantasy where the front door of an izayaka (Japanese bar/restaurant) called Nobu opens to an alternate medieval-style world called Aitheria whose citizens then discover Nobu and the amazing food and drink contained therein. Also, each short-ish (14 minutes or so) episode ends in a live-action segment showing either a Japanese celebrity visiting a restaurant who serves the food from the episode, or a lesson from a Japanese cook instructing you how to make it at home. What's not to love? Also, like Food Wars, it makes me really hungry after watching it, even if I've already eaten.
Meow Meow Japanese History Me: (scrolling through the endless amount of anime on Crunchyroll looking for something to watch)
Crunchyroll: Japanese history, but with cats!
Me: Yes please
I don't think I really need to describe this one...I mean, that tagline says it all, right? Be advised that, if you're looking for accurate research material, this might not be your best resource (they often change the names of historical figures, events, places, etc. to include the word "nya" - Japanese for "meow"), but if you're just looking for some general high-level introductory knowledge that you can look up more on your own if you're so inclined (and you love cats), then this show is perfect, and, at nine minutes an episode, fun and easy viewing. (Disclaimer: I haven't gotten through all the episodes yet, as there are a LOT of them)
Posted by Brian Tashima at 1:04 AM