Yes, despite the fact that I haven't done an Anime Roundup post since May, I have still been watching anime. Besides the new, ongoing episodes of Spy x Family and My Hero Academia (so good) and catching up with Demon Slayer (the Mugen Train and Entertainment District Arcs suddenly showed up on Hulu while I wasn't looking), I've checked out the following (beware mild spoilers):
Mushoku Tensei: Jobless Reincarnation 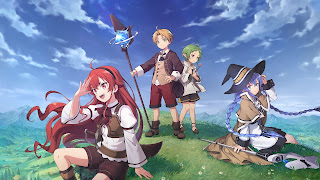 A loser in his early 30s gets hit by a truck and wakes up as a baby in an alternate, magical fantasy world while retaining his prior memories. He grows up to become a highly proficient wizard and goes on a bunch of adventures that were crammed into 23 episodes (plus an OVA) - not nearly enough, in my opinion (fortunately I've heard there's more on the way). Terrific coming-of-age story that checks all the boxes on my list: magic, isekai (portal fantasy), action, drama, comedy, romance.
Uncle from Another World 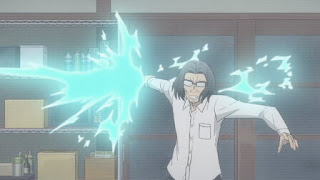 While we're on the subject of isekai, this one is about a thirty-something-year-old man - who looks much older, if you ask me - who had been hit by a truck as a teenager (what's with all the truck-hitting?) and was in a coma for 17 years... or so everyone thought. In show-reality, he was transported to a magical fantasy world where he became a proficient wizard (sound familiar?). Now, back in our world, he still has his magical powers but is a fish out of water when it comes to present-day technology. So far, the story is mostly him telling/showing his experiences in the other world to his nephew via a magic TV screen of sorts while his nephew (and his nephew's female friend) help him adjust to life back on Earth. It's supposed to be an ongoing series, so we'll see how it develops.
Shimoneta: A Boring World Where the Concept of Dirty Jokes Doesn't Exist 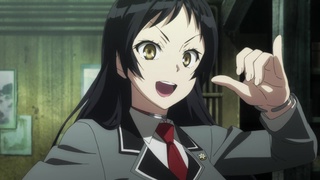 Warning: not for kids! But, I mean, there's lots of adult animation out there, right? South Park, Rick & Morty, etc., etc., etc. Anyway, this is a...what's a good word...raunchy (there you go) comedy about a dystopian future where the government aggressively represses any form of, uh...risque content or action or even thoughts (if this show itself were in this future, it would be in serious trouble). So then, of course, a rebellious organization forms and fights back by, well...you just have to watch it for yourself.
My Love Story!! 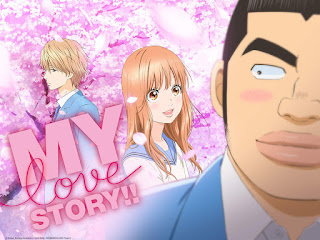 Now for something much more wholesome! I'm a sucker for light-hearted rom-coms, and this show fit the bill perfectly. The main characters are a tall, muscular, super-athletic dude with a kind heart who apparently scares girls off with his appearance (frankly, I find this hard to believe, but maybe it's a Japanese thing), his ikemen (good-looking, dashing) best friend, and a girl that our loveable giant saves from a groper. The first few episodes see them in a typical sitcom situation where the girl falls for the big guy but due to misunderstandings, he thinks she likes his friend instead. Fortunately, they do away with this premise pretty quickly and proceed to spend the rest of the series mostly just documenting their lovey-dovey relationship. Sure, there are some things that happen (including the introduction of your usual romantic interlopers), but mostly everything is happy and upbeat in a way that you wish real life could be (I lost count of how many times I said to my TV, "this show is just SO CUTE"). Apparently, there is a live-action adaptation, which I need to hunt down.
Romantic Killer 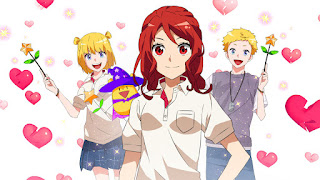 While we're on the subject of romance, this is a rom-com where a girl who is totally uninterested in dating (she's an otaku who loves video games, cats, and chocolate) finds herself the subject of a cupid-like wizard's mission to, well, hook her up, basically. The wizard, who can assume both male and female forms, turns our heroine's life into the equivalent of a dating sim game, guiding her into situations with various archetypal ikemen (there's that word again): the transfer student, the childhood friend, the rich boy, etc. It's a lot of goofy fun (with a fresh take on your usual anime-isms) for most of the season until (spoiler alert!) it takes a rather abrupt turn in tone near the end, which was slightly jarring but cool at the same time and totally in sync with the overall story. After it was done at only 12 episodes, I found myself wanting more.
Next week: while we're on the subject of things Japanese, we'll be doing Part Five of My Japanese Language-Learning Experience!
Posted by Brian Tashima at 7:11 AM