Recently, I had the pleasure of discovering that someone (not me, honest!) took the time and effort to create a page on the TV Tropes website for the Joel Suzuki series. 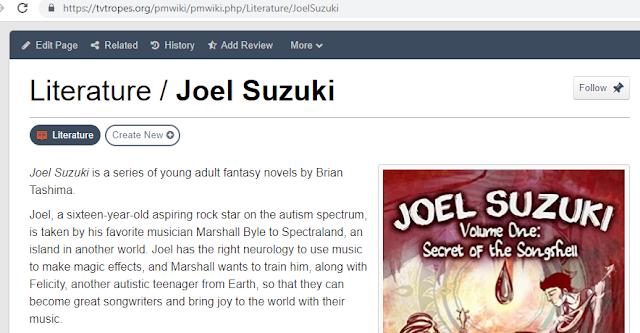 In case you're not familiar with it, the TV Tropes site is, in their words, "a wiki, sort of like Wikipedia but using different software and with a different purpose. (They) describe and collect examples of tropes in media. (They) also host reviews, liveblogs, and have forums where you can talk with other tropers."
Oh, and a trope is (again, in their words,) "a narrative device or convention used in storytelling or production of a creative work." For example, one of the tropes listed on the Joel Suzuki page is "Alien Sky," with the description "Spectraland has two moons, which are closer to the horizon than Earth's." This is considered a trope because the concept of the "alien sky" - especially one with two moons - can be found in many different works of fiction.
I have to say, I'm honored and flattered that someone (I don't know who, seriously!) found Joel Suzuki worthy of inclusion in the TV Tropes website alongside other heavy hitters of pop culture. The page, which includes tropes from Volumes One through Six, is also very insightful and well-written - whoever did it appears to have a firm understanding of everything that has happened so far in the series, and in some cases their paraphrasing of events is worded in such a way that it made me think, "huh...that actually sounds better than the the way I put it."
So, whoever you are, arigatou (thank you) and otsukaresama deshita (good job)! I'm happy and grateful that you seem to have enjoyed reading the series so far (at least enough to feel inspired to create the page) and I really loved reading each of the spot-on tropes in the list. Rest assured, I am hard at work on Volume Seven and should be able to have it out sometime in 2023.
And for everyone else, you can check out the Joel Suzuki TV Tropes page at this link!
Posted by Brian Tashima at 6:55 AM