Believe Me, I Am Still Working On Book Two

You know what's crazy? That there is a Kikaida reboot movie out and I didn't know about it until a couple of weeks ago. You know what else is crazy? That I have been working on Book Two almost every day now for nearly twenty-six straight months. 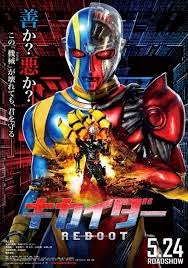 Now, the last time you heard about it from me was back in July (three months ago, holy cow), at which point I said that "the Book Two rewrite is coming along nicely - not much else to report there."

Well, that was true, at the time. Since then, though, I've actually gone back and pulled elements from some older drafts and synopses and incorporated them with some new ideas, all in an attempt to craft a story that is as strong as it can be while still following the overall series arc that I've envisioned. I've always been a stickler when it comes to plot holes in other people's works, so I like to try and make my own stuff as airtight as possible.

So, in a nutshell, the rewrite has not been progressing in a smooth, linear fashion - it's been a lurching, stop-and-start process, to say the least. At one point I found myself wishing that I had some kind of magical book blender...like, you know, I'd dump my several hundred pages of notes and drafts into it, push a button, and then - voila - out comes a delicious smoothie of a perfect, completed book that kept all the best ideas and strained out the not-so-good ones. I guess that's not really what a blender does. But you know what I mean.

Anyway, I just wanted to let you all know that I have not forgotten about Joel and Felicity's next great adventure - quite the opposite, actually. Just bear with me, and I promise, we'll get there eventually. Probably not by the time the Kikaida reboot movie comes out on DVD (which is this December - can't wait!), but hopefully sooner than later.
Posted by Brian Tashima at 8:11 AM