I was going to wait a little while longer before we did another one of these, but I've recently gotten heavily into a show called Gravity Falls on Disney XD (thanks, Star Wars Rebels, for the lead-ins). If you haven't seen it yet, it's an animated series about twin twelve-year olds Dipper and Mabel Pines, who spend their summer at a fictional Oregon (Pacific Northwest, woo) town called Gravity Falls. It's a children's show, but the writing is funny and sharp and there's a lot of subtle adult humor sown in. So, I asked Felicity (co-star of The Spectraland Saga) to do a liveblog of an episode with me. 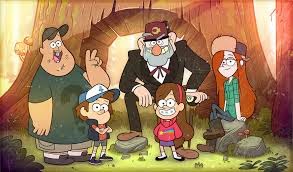 F: So u finally discovered this show huh
B: Wait, you've seen it already?
F: Ya
B: Why didn't you tell me about it
F: U never asked
B: Touche. Well here we go
B: We'll watch "Carpet Diem"
F: Fine w/me
B: Lol "Calling All Boys Pre-Teen Edition"
F:
B: I bet you had that
F: Shut up
F: I bet you were a nerd like Dipper
B: I still am
F: U said it not me
B: I love this theme song
F: My band can play it
B: Seriously?
F: No
B: You need a fun stick
F: I've had it with the fun stick
B: Good one!
F: Whatever
B: Fight fight fight! I say that when Boots and Mittens are play fighting
F: Where are they anyway
B: Sleeping
F: Of course
B: "Trying too hard - minus 15 suck up points" hilarious
F: U must have like negative one million suck up points
B: oh yeah, well u have negative infinity
F: Ur a suck up ninja
B: no u r
F: I think watching all these shows has turned u into a kid for real
B: Fine with me
F:
B: This is the best freak out scene ever
B: We need a carpet like that so you and Joel can switch bodies
F: No way man. I like being able to swim
B: Swimming is overrated
F: Says the guy that can't swim either
B: "Wolfman Bare Chest" - i bet you read stuff like that
F: "Why am i sweaty" - that's your favorite book
B: Maybe it is
F: Creepy
B: Lol "That's what they all say"
F: Goodbye childhood
B: Ha
F: Shut up old man
B: Ur on fire today
F: Whatever
B: I bet you told off the Calling All Boys phone like that
F: Maybe I did
B: Creepy
F: Look that's how u get a raise
B: I should try that
F: U should
B: But I need that carpet so i can switch bodies with a pig
F: That would be an improvement
B: Walked right into that one, I did
F: See, even women would like you more
B: Ok I think we're done here
F: I win the liveblog!!
Posted by Brian Tashima at 11:48 AM