So while my daughter and I wait patiently for the new Xenoblade and Zelda games - c'mon, Nintendo, announce the release dates already! (okay, I admit, not so patiently) - we've had to fill the gap with alternatives. Fortunately, there are still a few good ones out there. 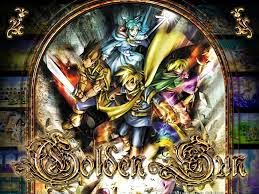 One of those is Golden Sun, a JRPG (Japanese role-playing game) that was originally released in 2001 for the Game Boy. It was re-released for the Wii U Virtual Console last year, and, after hunting through the eShop, we stumbled upon it in a manner similar to when we found the brilliant and quirky Earthbound. Unlike Earthbound, Golden Sun is pretty standard RPG fare, with swords and magic and so on, but it has a decent storyline, great music, and surprisingly good graphics given its handheld origins. I'm nowhere near done with it yet, but so far, it's been fun, and I'd definitely recommend it. 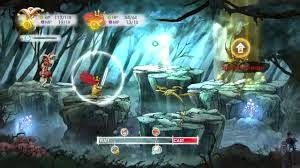 Have I talked about Child of Light yet? We actually discovered this one on the eShop last December. I was skeptical at first, mainly because I don't really like 2-D side scrollers, but shortly after I started playing it, I was hooked. The graphics are absolutely gorgeous, and the game itself has a wistful, bittersweet vibe that sets it apart from a lot of other similar titles. The storyline was thoughtful and terrific, and the timing-based combat system was very cool once I got used to it. My only gripe with this game is that it was too short, even with all of the side quests. Highly recommended. 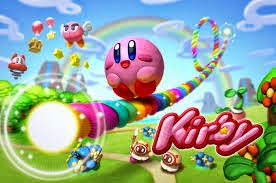 And then, of course, there's the new Kirby title, Kirby and the Rainbow Curse. I have to admit - Kirby games, despite their cuteness, are actually quite challenging (to me, anyway), and I find myself yelling and freaking out when I play them more often than with most other games. I've just started on this one, and it's been no different - it took me ten tries to beat Hooplagoon, the boss of the second stage. Aside from that, two things about this game bug me: (1) I'm not sure why it's a Wii U title, rather than a DS one. Because of the stylus-based gameplay, you're so focused on the gamepad screen that the TV display is basically useless. It does allow my daughter to watch - and laugh at - my struggles, though, so I suppose that's a plus. (2) Also because of the stylus-based gameplay, I find that my hand often blocks out important details that I need to be seeing, like upcoming hazards and such. It's not a huge issue, and perhaps it's more user error than anything else (I'm sure more experienced players know a way around this), but it is annoying, nonetheless.

Anyway, that's the latest. I'm pretty sure Golden Sun and Kirby will keep us busy for at least a little while longer, but seriouslyhurryupNintendowereallyreallyneedthosenewXenobladeandZeldagames!!1!11!
Posted by Brian Tashima at 12:06 PM