Previously on TV Roundup, I said "I'm sure it won't take me another fifteen months to post episode six of this roundup series." And I was right! It was only five months. And what an eventful five months it's been, in TV-land at least. So here we go (beware of mild spoilers):
Obi-Wan Kenobi 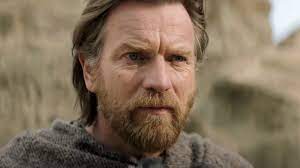 For me personally, the emotions that this show generated outweighed the logic gaps by a fair margin. I also liked the way it checked off all the continuity boxes shopping list-style (especially the reason why Obi-Wan calls Anakin "Darth" in Episode IV). I mean, that's what I was here for, after all! The only thing I felt they missed was why Vader said "Obi-Wan once thought as you do" in Episode VI. Maybe they could've had Obi-Wan try to convert Anakin back to the light after apologizing but before Anakin said that Vader is all that's left? Oh well. Anyway, I won't get into the whole trench coat-rescue business, or the lack of a tractor beam on Vader's Star Destroyer (maybe it was under repair?), or the constant leaving-people-for-dead (Felicity's pet peeve), or anything like that, because Tala's blaster holster being a perfect carrying case for Lola was just too good.
(on Disney+)
The Time Traveler's Wife 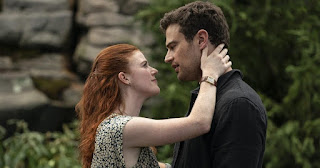 A romantic dramedy involving time travel adapted from a popular novel by former Doctor Who showrunner Steven Moffat*? Sign me up! I really don't understand why this show seems to have bombed with critics. I don't care, I enjoyed it, just as I enjoyed Moffat's run with the Doctor (this has been pointed out elsewhere ad nauseum, but Moffat actually used the book this show is adapted from as inspiration for the Matt Smith-Eleventh Doctor episodes with Amy Pond, because apparently he couldn't get the rights to the book back then). I'm hoping for a season two, but if not, they did a nice job with the ending.
* Moffat did the adaptation, the novel was written by Audrey Niffenegger. In case that wasn't clear.
(on HBO Max)
All the Marvel Shows on Disney+ Since Hawkeye Up to Now

As you probably already know, I am there for all the Marvels. Not just Captain and Ms., but everything the MCU wants to put out. I enjoyed Moon Knight, and of course Ms. Marvel was mind-blowing in multiple ways. I appreciate how Marvel/Disney seems to understand that people like me are their audience, what with all the Easter eggs and fan service moments (no, anime folks, not THAT kind of fan service) and their completely having given up on trying to make their theatrical releases make any kind of sense if you haven't been watching the shows on Disney+.
(on Disney+)
Stranger Things, Season Four

Things I said out loud to my TV as I was watching the latest season of this show:
"An hour and a half went by already??"
"As a writer, I know exactly what they're doing here, but I'm still moved by it."
"Does Metallica really need more money and publicity??"
and
"Oh man, this show is SO GOOD" (about twelve times)
(on Netflix)
The Boys, Season Three 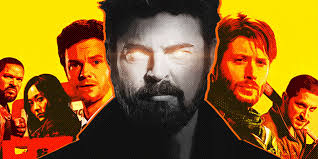 Just when you think this show couldn't get any more over-the-top, well... I mean, no one is spared, everything is fair game, and it's simply glorious - as long as you're not easily disturbed or offended, that is. Among the many chuckles it generated from me was for the name "Payback" for the other superhero team (because, you know, "Avengers"). I missed the commentary after-show that accompanied season two, why did you not do one, Amazon? But anyway, the animated spinoff The Boys Presents: Diabolical made up for it.
(on Amazon Prime)
Killing Eve, Season Four 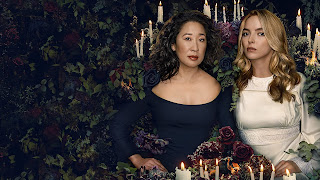 It had been a while since I'd seen season three, as I had waited until season 4 (the show's final season) was available on a streaming service without having to pay extra charges. Thus, there were times when it veered into "I have no idea what's going on, but I'm enjoying it anyway" territory. And yeah, I guess the ending was a bit unsatisfying, but really, how else was it supposed to end? I do want to know who the sniper is, though.
(on Hulu)
Honorable mentions: Undone season 2 (Rosa Salazar is amazing and hilarious and I really would love to cast her as Lydia opposite Jessica Henwick as April in my baseball rom-com Try Again Tomorrow), The Orville: New Horizons (which gets into some pretty heavy subject matter. There are still moments of juvenile humor, but they are now few and far between), Maggie (a sitcom that features a character that originated in a horror movie - pretty cool premise), Solar Opposites season 3, Letterkenny, Harley Quinn, Philip K. Dick's Electric Dreams, Love on the Spectrum: U.S., Rebel Without a Crew, and others that I've probably just forgotten about. Man, I really do watch a lot of TV.
Posted by Brian Tashima at 7:46 AM