Some of you may have noticed the term "nerdpunk" used in connection with my various (mostly band-related) activities, like on social media, this blog, or even in newspaper articles. 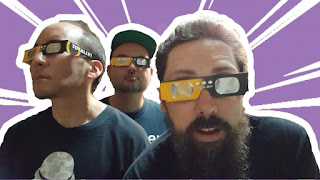 But what is nerdpunk, anyway? Is it a sound, like grunge, or metal? Well, if you Google "nerdpunk," what you get are mostly references to "geek rock," which, according to Wikipedia, is "a musical subgenre derived from alternative rock within the nerd music group...characterized by the standard instruments of rock music often combined with electronic and unusual instruments, references to geek culture and specialized, yet often mundane, interests, and an element of humor." The Wikipedia article goes on to say that "nerd punk is a fusion of nerd music and punk rock. It shares the characteristics of geek rock with the fast-paced songs, hard-edged melodies, and singing styles of punk" and cites the Portland, OR(!)-based band Thundering Asteroids! (2009-2016) as an example.

Okay, fair enough. But in my opinion, the label "nerdpunk" goes way beyond that. To me, it represents not only a musical sound or subgenre but also an entire lifestyle, an ethos. It embodies not only the desire to consume or create pop culture as a means of entertainment, but also the inspiration to nurture and develop projects, movements, and messages of your own that give back as much joy as you've received from the creations of others. It's a symbol of an independent, entrepreneurial DIY spirit motivated by a desire to make the world a more positive place through the things that we love and that bring us together, including art, stories, music (and beer, for those of us who are of age).

So yes, while nerdpunk may be a musical sound (Nerf Herder?) and/or style (Devo?), it's also a film school student who created a to-be cult classic out of an autocorrected word on his phone, or your former co-worker who started their own successful brewery from scratch, or a tech entrepreneur who went from running a job-creating nonprofit to running for president. It's, as Kyle Stevens of the geek rock band Kirby Krackle (who we met at a Comic-Con some years back) has said, "anything we are really passionate about."