Yes, I know I just did an Anime Roundup post three weeks ago, but when yours truly complies with stay-at-home orders, anime gets watched. In large quantities. And then I have to talk about them before I move on to the next bunch. So here we go! This is one of those shows that made me say out loud to my TV several times an episode, "THIS SHOW IS SO GOOD." I liked this one so much, it vaulted straight up to #4 on my all-time favorite list, which may not sound like much until you consider the vast amount of anime I've now seen (if you're curious, my top three are K-On!, Aggretsuko, and Madoka Magica). With its pitch-perfect blend of humor, action, emotion, video game-y tropes, shocking twists, and tons of extreme graphic violence on the level of John Wick or Kill Bill, it was right up my alley (but, despite its TV-14 rating, not very appropriate for younger audiences. Seriously, why shows like this get a TV-14 rating, but stuff like Hunter x Hunter gets TV-MA, I have no idea). Also, one of the many great things about it is the way it humanizes its villains to the extent where you almost sympathize with them, which is something you don't see very often. Anyway, if you're a mature viewer and decide you want to check this one out (it's basically about a band of assassins trying to overthrow a corrupt empire), do so but be warned: this show does not pull any punches, right up until the very end.

Wotakoi: Love is Hard for Otaku 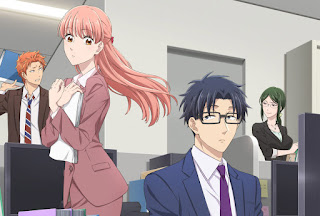 And now for something completely different! This is a light-hearted slice-of-life romantic comedy about two childhood friends who reconnect as adults and seem perfect for each other...except that they're otaku (basically, pop culture aficionados - or, simply, nerds). Is love hard for otaku? Yes, yes it is. I should know. Ahem. Anyway... 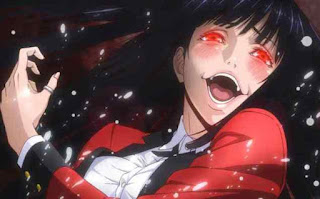 I'm not into gambling at all (during my first trip to Vegas, I lost $20 in 10 seconds to a slot machine and then declared myself done), but still, I found this show - which is basically about a high school where the pecking order isn't determined by academics or athleticism, but by gambling skills - to be pretty dang entertaining. While most of the exposition (explaining how the particular games work, how the winners pulled off their improbable victories, etc.) flew right over my head, I really enjoyed all the manic reactions given by the various characters as they played for increasingly high stakes, along with the accompanying dissonant jazz soundtrack. There's also a live-action adaptation that loosely follows the plot of the anime, which I more-or-less watched concurrently and found to be just as fun (and delightfully over-acted).

The Garden of Words 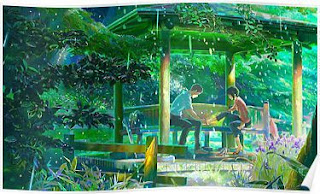 At 46 minutes long, this isn't exactly a short film, but it isn't a full-length feature, either. What it is, though, is a touching and emotional rom-dram about a 15-year old boy and a 27-year old woman (trust me - in the film, this is not as creepy as it sounds) who keep running into each other in a park during rainstorms. It apparently has won a bunch of awards, which I don't find surprising. 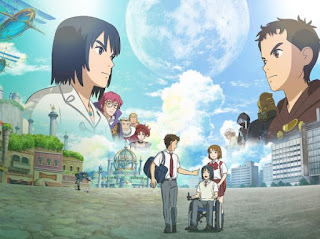 A full-length movie that is based on a video game and was directed by a Studio Ghibli animator, this one checks almost all the boxes on my I-Will-Enjoy-This List: Portal fantasy? Check. Parallel world where people in each world are linked to each other? Check. Action, humor, drama? Check. Love triangle, betrayal, plot twists? Check. Powers, magic, cute animal sidekicks? Check. In fact, about the only thing separating it from Joel Suzuki, Volume One is magical musical instruments.

And speaking of Joel Suzuki...in case you didn't know, you can get free sample chapters of Volume One simply by going to this link here and entering your email address! Don't worry, we won't spam you. Although, actual Spam (with a capital S) is quite yummy. 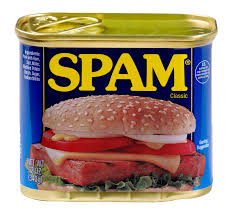