April 23rd: The Day That Joel First Went To Spectraland 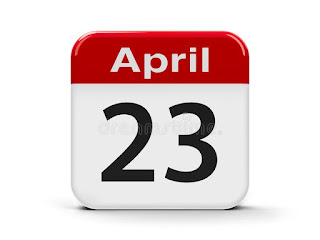 B: Hey, guys.
J: Hello.
F (not looking away from her game): Whose birthday is it?
B: What? Oh - the cake. No, it's no one's birthday. It's for an anniversary.
F: Anniversary of what?
B: April 23rd, 2012 is the day that Joel first went to Spectraland.
F (to Joel): Is that right?
J: Yes. I thought you knew that.
F: Maybe I did. I probably forgot.
B: So, yeah, I figured that since the day falls on a blog post day this year, that we would have a little celebration.
F: What kind of cake is it?
B: Chocolate.
F: Okay, I'm down.

Brian puts the cake on a table and cuts it into three pieces.

J: Did you know that April 23rd is also World Book Day?
B: That's right!
F: Man, they have a day for everything now, don't they?
J: It started back in 1995, as a way to honor several famous authors who died on that date.
B: Including Shakespeare, right?
J: That's correct. He might have been born on April 23rd, as well.

Brian serves the cake to Joel and Felicity.

B (to Felicity): Are you gonna pause your game?
F: Hold on, I'm in the middle of a boss fight.
J: Also, the number 23 has a lot of interesting facts about it. It's the smallest odd prime number that isn't a twin prime. The Earth's axis is tilted at about 23 degrees. And human reproductive cells have 23 chromosomes.
F: There's also that Jim Carrey movie. And Michael' Jordan's jersey number. And the first half of the emergency code in Monsters, Inc.
J: True.
F: I think every number has interesting stuff about it, if you look hard enough.
B: Well, at any rate, happy Spectraland anniversary, Joel.
J: Thanks.
F: Wait, what about MY anniversary? I went to Spectraland a few days before Joel did and we didn't celebrate that.
B: Well, because it didn't fall on a blog post day. And also, that day wasn't chronicled in a book.
F: But Joel's was?
B: Um...no, just kidding. Anyway, I'll go get some diet soda. You finish your boss fight.
F: Whatever.

SMASH CUT TO BLACK
Posted by Brian Tashima at 6:23 AM