In the season ten finale of Doctor Who, the Doctor willingly risks his life to save a small farming community from an advancing army of Cybermen. 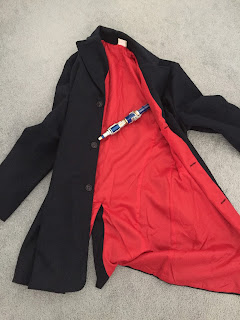 Thing is, though, with the Doctor, doing something like that isn't that much of a risk because - as fans of the show know - if the Doctor dies, he'll just regenerate into a new version of himself (herself?)

Most of us aren't quite as fortunate. If we die, we generally don't start giving off bursts of yellow energy before changing into someone else. Which makes it even more impressive, I think, when people who aren't the Doctor put themselves in harm's way to help others.

Here's an interview I did with James, a real-life Doctor - a firefighter paramedic, actually - from California who has been practicing his profession for almost two decades now. I hope you find his story as interesting, informative, and inspiring as I did.

(Editor's note: answers have been edited for brevity and clarity.)

Is your job something that you always wanted to do (and continue to want to do), despite knowing the risks? If so, why?

My first recollection of being interested in this job was when I was around 4 or 5. My grandfather was a fireman, and he would often tell me stories about what it was like. Also, one of the popular shows of the time was Emergency!, which made the whole job look like a series of adventures and good times - for a show about life and death there was very little death or downside depicted.

I don't really know that I had a real understanding of the risks involved even as I began taking some prerequisite classes. There were discussions of the dangers, but until I started working in the field it was all something of an abstract concept. As I've grown in the job, though, I've seen and experienced many of the risks first hand. I've lost colleagues and seen many of them injured at one point or another. I, myself, have been pretty fortunate over the course of my career to have only received cuts, bruises, and minor burns.

Despite that, I still believe that I have the best job in the world. I don't really know of anything else I would rather do. It makes me proud to be there when people need me, and to have the skills, knowledge, and experience to solve their issue or stabilize them long enough to facilitate transport to a higher level of care.

Do you feel fear and/or stress at any point, and if so, when? When you first get called to a situation, when you arrive at the scene, or at some other time?

Stress seems most often to be like background music to me at this point in my career. It's there, but it's almost always just below notice. For me, stress doesn't really start to play a role until something goes sideways during the call. We have treatment protocols for patients and standard operating guidelines for incidents that we start with, but occasionally things don't fit into those templates so we have to adjust on the fly.

If you do feel stress, how do you overcome it? Are you just naturally "wired" to deal with it, or does it take practice and experience?

I don't think anyone is naturally "wired" to deal with the stress that we endure at times. It takes practice and training to stay on course when things are going wrong.

Having relationships with your crew and coworkers helps. We drive each other. There is a collective confidence when I'm working with experienced and competent people that I've known a long time.

Is there a long-term stress factor? If so, how do you deal with that?

The short answer is "of course there is." Some of the things we see and deal with leave lasting impressions. I can still remember almost everything about my first pediatric CPR - the boy's name, the porch, his mother arriving on scene, her anguished wails as our efforts failed to bring her child back. Those things stick with me and occasionally I have dreams about it. It's all a form of post-traumatic stress disorder. My employer offers a counseling program, but therapy often begins once we get back on the engine. We talk out the situation on the way back to the station and that's pretty much the end of it most of the time.

How do you "psych yourself up" in dangerous situations? Is it the motivation of knowing you're doing a good deed? Is there a thrill or an adrenaline rush factor involved?

When I first got hired, it was easy to be wound up for every call. As I've gained experience, most of the time I'm more calculating than I used to be. There is an intrinsic reward for helping people, whether it be a small thing or truly making a difference. It's a validation of your training and your choices. My crew and I have saved people's lives, and that's an awesome feeling.

And yes, of course there's an adrenaline rush - any time you go crawling into a burning structure there's some sort of thrill involved. It's the feeling of going where almost no one else goes and getting the job done.

It really comes down to the fact that I work with good, experienced people who aren't going to let me do anything dangerous alone. My saying is "we get through it, because we get through it together."
Posted by Brian Tashima at 7:32 AM