It's hard to be productive at the moment. Even though I'm used to working at home by myself (or with cats), there are - obviously - a lot of world-event-level distractions going on, and frankly, it's all a bit exhausting. That said, I'm trying my best to keep pushing forward, little by little, day after day, making as much progress on my projects as I can even if that means just writing one paragraph in a draft that might get thrown away later, or coming up with a vocal harmony for a single line in a chorus. Here's the latest on what I've been up to: 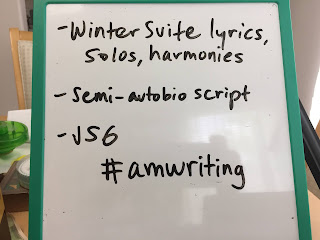 Music
The virus-induced lockdown threw a wrench into the plans for Second Player Score's fourth album, as we were neither able to get together for rehearsal nor did we know when we might be able to go back into the studio. After three months our area moved into Phase 2 reopening which allowed the three of us to be in the same room together once again, so now we're starting to get back on track. Since the fourth album (entitled Four-D, more details here, here, and here) will be split into four seasonal "suites" of four songs each, we targeted the "Winter Suite" as being first up since it seemed to be the most likely one that we'll be able to bootcamp (i.e. do pre-production on), record, and then release during the time period in which it's set (the winter). Two of the songs are already fully written and arranged, which leaves two others in need of things like lyrics and vocal harmonies. Oh, and a guitar solo.

Writing
I recently wrapped up yet another read-through of Joel Suzuki, Volume Five, making a few updates and edits along the way before I sent it off for a sensitivity-reader check. While that's being done, I've actually started on Volume Six(!), crafting a basic outline along with around 2000 words or so. Granted, said words are pretty terrible, but I needed to - as part of the process for Volume Five - at least get the beginning of the story down on paper, making sure that the continuity jives so that I don't find myself stuck in a corner that I can't write myself out of later on.

I also finished a seven-week script-writing workshop with Jonathan Stark and Tracy Newman, two Emmy Award-winning writers who created the Jim Belushi show According to Jim, among their other numerous accomplishments. It was a fun and educational experience that I got to share with a group of writers from L.A. and elsewhere (all done via Zoom, of course), all of whom are extremely cool and talented people. Each week, we took turns critiquing one another's scripts (I submitted Hold My Beer for consideration) and exchanging ideas. It was supposed to end after the sixth week, but John and Tracy were generous enough to add an extra week where we would each write a single five-page scene and then we would review them all and try to guess who wrote what. For my scene, I wrote a fictionalized account of the time when my son asked me to write him a book (which, as you probably know, was the actual genesis of the Joel Suzuki series). Everyone's scenes went over so well that we're all now developing them into full pilot scripts that we will send to John and Tracy later and possibly meet up again to discuss at some point in the future.

So that's mostly what's been going on, along with managing the Kickstarter campaign for Glorified Issue #3 (which ends next week), applying for a screenwriting development program from Imagine Impact (writers, you should check it out), continuing to learn Japanese (kanji is so dang confusing), and recording weekly episodes of the Second Player Speaks podcast. If that sounds like a lot, understand that I'm just doing it all in bite-size chunks in between checking the news and watching anime. It's like if you eat three blueberries every day, after a little over a month you'll have eaten a hundred blueberries. Okay, never mind, terrible example, but I think you get the idea. The important thing is that, like a shark, you just have to keep moving - and that's my productivity tip of the week.
Posted by Brian Tashima at 6:26 AM